Last year will go down in history as the year of the pandemic. Sporadic cases of infection in China developed into a global health crisis that affected us all. As the number of coronavirus infections grew, service sectors were closed, exports collapsed and employment rapidly declined. The direction of the economy was determined – and continues to be determined – by the development of the health situation in different countries. It is still impossible to assess the long-term effects of the pandemic on the finances and indebtedness of governments, corporates and private households. There is still considerable uncertainty surrounding the economic outlook, and the risk of a new recession is high.

In the spring, as the crisis hit, governments, central banks and supervisors took swift action to safeguard the functioning of society and ensure access to credit for corporates and households. The ECB’s accommodative monetary policy was highly important. In Finland, the FIN-FSA lowered banks’ macroprudential capital add-ons and, in the euro area, the ECB allowed banks to temporarily operate below the capital and liquidity buffers. We cover this in more detail in our article “Fast decisions supported banks’ resilient operation in exceptional circumstances”.

In Finland, bank lending to corporates and households continued uninterrupted, and banks were resilient in granting their customers payment holidays. Both insurance companies and pension companies also granted payment holidays to their customers. The capacity of unemployment insurance funds was most severely tested at the beginning of the year, but overall the sector coped well. The funds recruited new staff to relieve the application backlog and utilised automation in the processing of benefits.

In Finland, the situation of the banking sector has remained strong and credit losses realised by banks have not as yet increased significantly. Viewed as a whole, the solvency of the insurance sector also remained good. In March, however, the FIN-FSA issued to the Ministry of Social Affairs and Health a notification on exceptional circumstances concerning the employee pension sector, as exceptional circumstances evident in the financial markets posed a risk to the average solvency of pension institutions. Towards the end of the year, we considered that the situation had normalised.

It is appropriate to prepare for a deepening of the crisis throughout Europe and also in Finland. Uncertainties remain about the availability and effectiveness of vaccines, and new mutations are spreading rapidly from one country to another. We are living on terms imposed by the health crisis. Supervisors have considered caution to be the wisest policy: for example, banks must prepare for the realisation of credit loss risks and a weak scenario. They must also be able to analyse as precisely as possible the quality of their credit portfolios, notwithstanding the payment holidays they have granted. In these circumstances, the ESRB (European Systemic Risk Board), the ECB and also the FIN-FSA have recommended a very moderate dividend policy for both banks and insurance companies.

The ECB’s tight dividend recommendation has been strongly criticised, particularly in Finland. An alternative solution would have been to permit well-capitalised banks to pay a reasonable dividend. Preparation for uncertainty prevailed in decision-making, however. Discretion is often the better part of valour. We will not have deeper knowledge of the state of banks’ balance sheets until next autumn, when the stress tests have been carried out and payment holidays have largely ended. It may then be possible to remove the recommendation on general dividend distribution restrictions if there is no significant turn for the worse.

At present, it is important to ensure that recovery, support and forbearance measures do not all come to an end at the same time. It is essential for the financial sector to be able to operate as efficiently as possible and support the real economy. What would this mean in practice? Banks’ capital requirements, for example, should not be increased during the recovery phase. By this I mean mainly the so-called Pillar II requirement set by the banking supervisor as well as macroprudential requirements. One of the lessons of this economic crisis is that the focus of macroprudential buffers should be shifted from structural to cyclical ones. The countercyclical capital buffer requirement should be increased during an economic upturn, so that it can be released during a downturn.

It remains to be seen how large the structural changes due to the crisis will be in the financial sector in Europe, where there are large differences between countries both in the depth of the crisis and in starting points. There are also differences with regard to degree of digitalisation, which has taken a significant leap forward throughout Europe as a result of the coronavirus crisis. Digitalisation may have a significant impact on business models and industry structures in different countries.

Preparing for the future will also require a comprehensive review of current resolution legislation. The differing objectives of state aid regulation and bail-in rules, the harmonisation of the creditor hierarchy, resolution for small and medium-sized banks, and the role of the Deposit Guarantee Fund in the winding-up of a bank are issues that have been raised. The Commission is expected to propose amendments to the Resolution Directive later this year. In this, it will be important to ensure that the authorities are able to deal with the winding-up of any bank in a timely and controlled way. All measures must also be aimed at maintaining confidence in the banking sector without recourse to state aid. Developing a more effective resolution framework is also a way to move forward in decision-making on a common deposit guarantee, EDIS. Insurance sector resolution – national regulation of bankruptcy and liquidation – has also been long overdue, and solutions are needed to support proper preparedness.

Times of crisis generally accelerate changes in regulation and financial infrastructures. Recovery from the economic crisis caused by the pandemic has highlighted the importance of progress on the Commission’s Capital Markets Union project. Implementing the project, even gradually, would help economic recovery and the transition to a digital and green economy. From the Commission’s broad action plan, means should be selected that support these goals, without losing sight of investor protection. Promoting market funding would diversify financing channels and reduce corporate borrowers’ funding risks in particular.

As part of the package, the Commission is assessing the aftermath of the Wirecard accounting scandal in Germany. The scandal highlighted shortcomings in legislation, cooperation between authorities and supervisory practices. Analysis of the case is still under way, but it should be clear that changes are needed. We must ensure that there are no legal obstacles to the flow and exchange of information between the various authorities, and also that the responsibilities of the supervisor are clear. The supervisory authority’s independence from political decision-makers should be self-evident in all member states.

The Wirecard case also highlighted the importance of up-to-date, accurate and unambiguous information for both investors and other stakeholders. A flood of facts can also adversely affect the investor’s ability to find relevant information. Ensuring reliable and sufficient investor information, on the one hand, and promoting financial literacy, on the other, will play a key role in the development of capital markets in the coming years. In the promotion of financial literacy, media articles relating the millions earned by speculative investors on individual investments are highly detrimental, as they tend to lead inexperienced investors towards unhealthy risk behaviour.

The financial sector’s reporting obligations with regard to sustainable finance will gradually come into force over the next few years. As investors increasingly demand sustainable finance products that take the environment, social responsibility and good governance into account, the industry is also under pressure to respond to the increased demand while taking the obligations of new regulation into consideration. In regulation, it is important to remember that the amount of information required should not became so detailed that investors are no longer able to distinguish between what is relevant and irrelevant.

In recent years, European regulation and supervision of the financial sector has increasingly begun to emphasise the importance of good governance. Why so? Deficiencies in good governance have been considered to have contributed to the escalation of crises and to bankruptcies and abuses of financial sector actors. A major reason for tightened regulation, moreover, is learning from past mistakes: realising what is required in the financial sector from those in management positions, i.e. the Board of Directors, the CEO and the key function holders. In regulation, there are sector-specific differences in the level of detail, but regulatory requirements in the banking and insurance sectors, for example, cover individuals’ experience, competence, reputation, conflicts of interest and time management, including restrictions on the number of board memberships. According to ECB policy, the CEO and the Chairman of the Board of a credit institution are required to have ten years’ practical experience.

The strict requirements set at the European level do not extend, however, to sectors regulated on a purely national basis. This is a significant flaw. In my opinion, we have no reason to settle for a lighter level of requirements in domestic legislation, particularly with regard to actors important for society. In October 2019, the FIN-FSA submitted a proposal to the Ministry of Social Affairs and Health to revise regulation of the professional qualifications and experience of the board and management, as well as the key function holders, of employee pension companies. The FIN-FSA considers that, given the social significance of the sector, current regulation is partly deficient and disproportionate compared with, for example, the regulation of insurance companies. The FIN-FSA’s supervisory findings support the prompt consideration of the proposal.

The FIN-FSA switched almost entirely to teleworking in March last year. As matters stand, the arrangement will remain in place at least until the end of April. Effective IT teleworking tools have facilitated extensive working from home. With the exception of on-site inspections, it has been possible to work almost normally. In fact, we have been able to better prioritise our work on what is essential for the sound operation of the financial sector. We have also attended all EU meetings by remote connection.

It must be remembered, however, that as human beings we are all different; teleworking comes more naturally to some than to others. For this reason, we have emphasised the importance of good management and care of the wellbeing of staff members. Presence and caring, even virtually, are of prime importance.

I thank all FIN-FSA personnel for this past year. You have displayed commendable resilience, even though there have been no indications of improvement in the pandemic situation and no return to the office is in sight. We all miss our working community and its social interaction. But we will see it through. 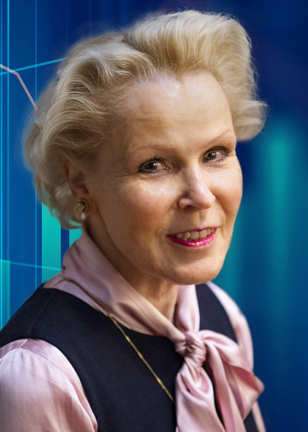