The review year was characterised by the coronavirus pandemic. The pandemic intensified rapidly at the beginning of the year with intense and wide-ranging impacts. On the other hand, the policy measures taken to mitigate the pandemic globally, within the European Union and in Finland were unprecedentedly extensive. So far, the negative impacts of the pandemic as a whole on the Finnish economy have remained milder than was anticipated in early part of the year, and smaller than in the European Union on average. The pandemic is not yet over, however, and it will also leave permanent scars on the Finnish economy. Some of the impacts are more apparent than others. An example of this is the rise in public debt. Some impacts are more difficult to estimate, however: What kind of enduring effects will the pandemic have on the behaviour of people and businesses and on the outlook of different industries?

At an early stage of the coronavirus pandemic, there were sharp valuation adjustments in the financial markets, and prices of risky assets, such as equities, declined steeply. From April onwards, financial market valuations reflected expectations of the post-coronavirus period and recovery, although the real economy contracted in all EU countries. The prices of equities and many other assets increased while interest rates remained at zero or negative levels. At the same time, credit risks increased.

The coronavirus pandemic caused a significant global recession in the review year. Restrictions imposed by governments, in addition to the cautious behaviour of households and companies, left their mark on economic developments. The severity of the pandemic and the depth of the recession varied across countries.

Economic policies were geared to mitigate the economic impacts of the crisis in many ways. Public borrowing grew rapidly and central banks’ monetary policy measures, for example through securities purchases, increased. Supervisory authorities took steps to ensure, among other things, that the lending capacity of the economy remained stable. The scale of measures was broad, and the volume of stimulus was exceptionally large.

The performance of financial markets during the year was bipolar. In early spring, there were very large price fluctuations; equity prices, for example, declined significantly in February–March. Investor confidence recovered after decisions and measures taken by governments, central banks and supervisory authorities, and equity prices rebounded. Valuations were based on an expectation that the negative economic impact of the coronavirus pandemic would remain temporary due to stimulus measures and extensive vaccinations. However, the level of interest rates remained at zero or negative as in the previous year, reflecting the overall weakness of economic development. The price performance of the financial markets diverged from the state of the real economy.

In Finland, the coronavirus pandemic reduced economic activity particularly in the second quarter, after which the economy began to recover. The situation varied greatly across industries, and unemployment increased during the year. Earlier trends continued in the housing markets: housing prices continued the trend seen in previous years, namely prices rose in large cities but either remained unchanged or declined elsewhere. Household indebtedness rose. Towards the end of the year, the sentiment and outlook of households and companies improved somewhat.

The coronavirus pandemic and the consequent economic recession affected the operating environment for Finnish banks. Despite the elevated uncertainty in the economy, changes in the capital ratios of the Finnish banking sector remained minor, and CET1 capital adequacy ultimately improved a little. The capital ratios of the banking sector remained stronger than the European average. In the spring, Nordic macroprudential authorities reduced the additional capital requirements, which improved Finnish banks’ possibilities to grant credit and withstand losses.

The operating profit of the banking sector increased from the previous year, but the growth took place against the backdrop of negative one-off items that weighed on the operating profit a year earlier. Net interest income increased slightly from 2019, as the growth of the credit stock outweighed the negative impact of declining market rates and margins on interest income. Credit impairments and non-performing loans grew, albeit moderately considering the economic situation. The level of non-performing loans in Finland remained among the lowest in Europe. 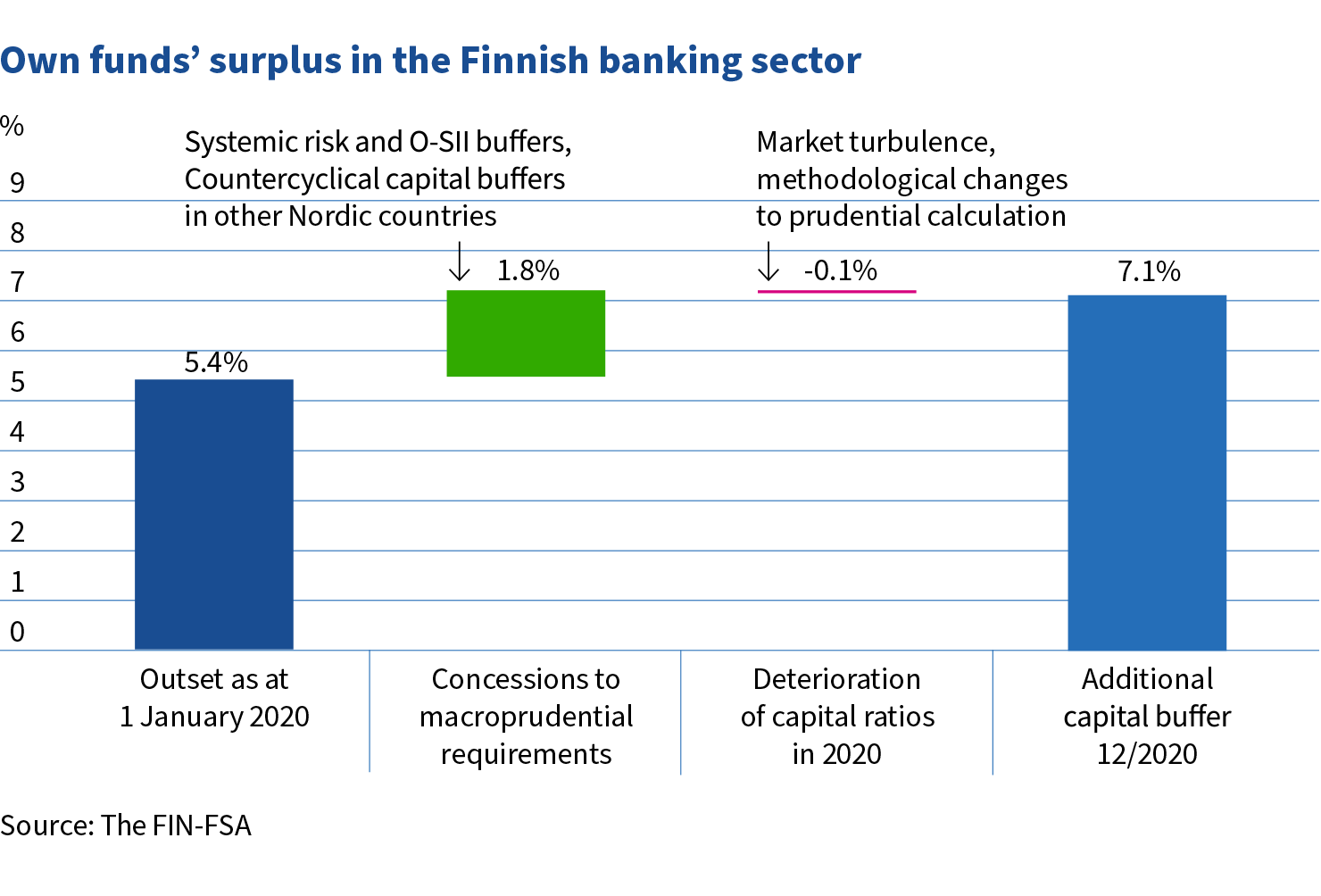 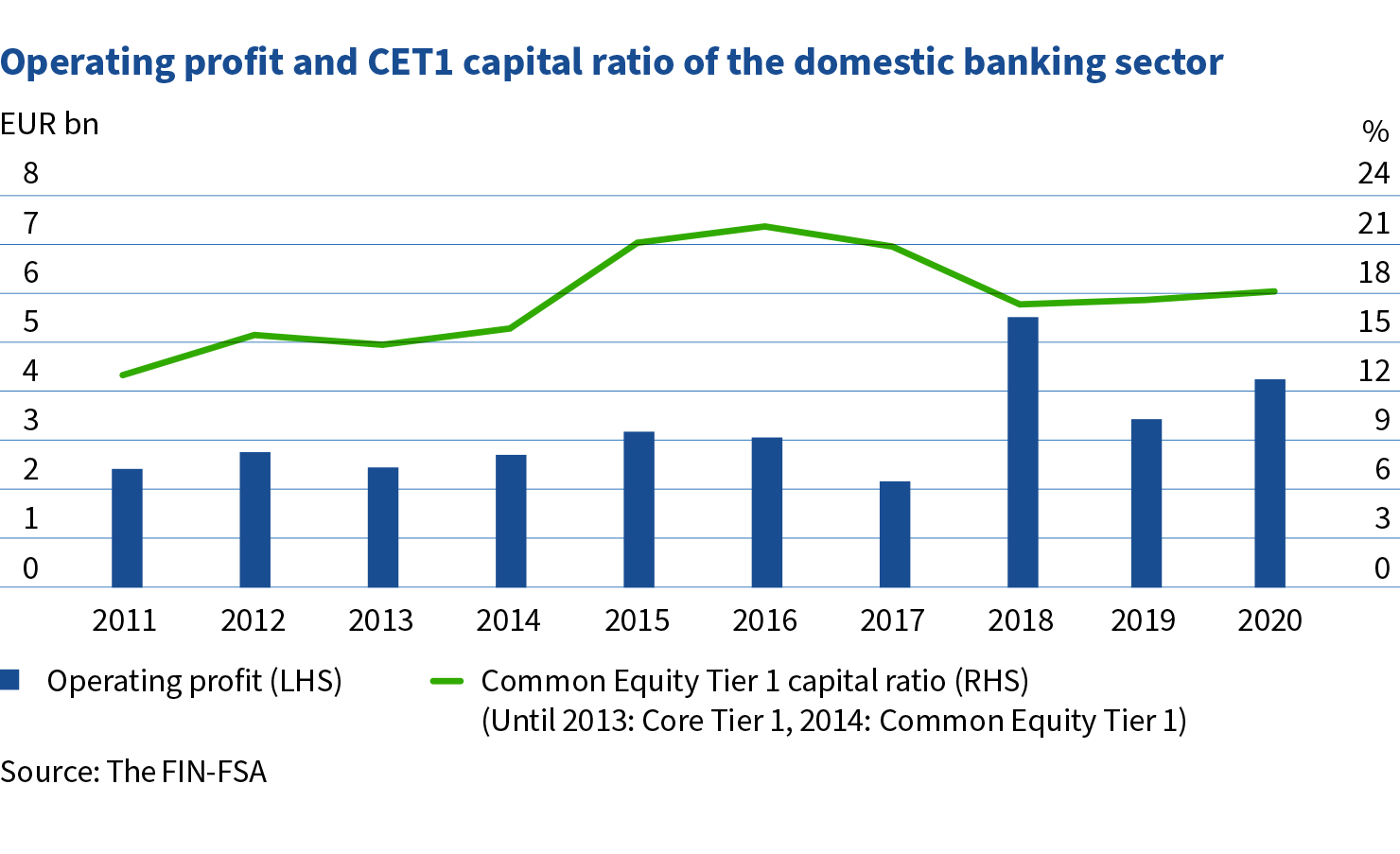 The coronavirus pandemic made life insurance customers cautious, and new premiums written did not accumulate in unit-linked insurance at previous levels. Premiums written in 2020 declined to the lowest level during the current Solvency II regulation. The sale of risk assurance increased, however. Claims paid continued to outweigh premium income.

The solvency ratio of the life insurance sector remained at a good level, although it declined clearly from a year earlier. Own funds decreased and the solvency capital requirement increased. The interest rate level, which declined significantly during the year, increased the amount of technical provisions. Good returns on higher-risk investments increased the capital requirement for market risk. Life insurance companies’ investment returns recovered during 2020 and ended up clearly positive. 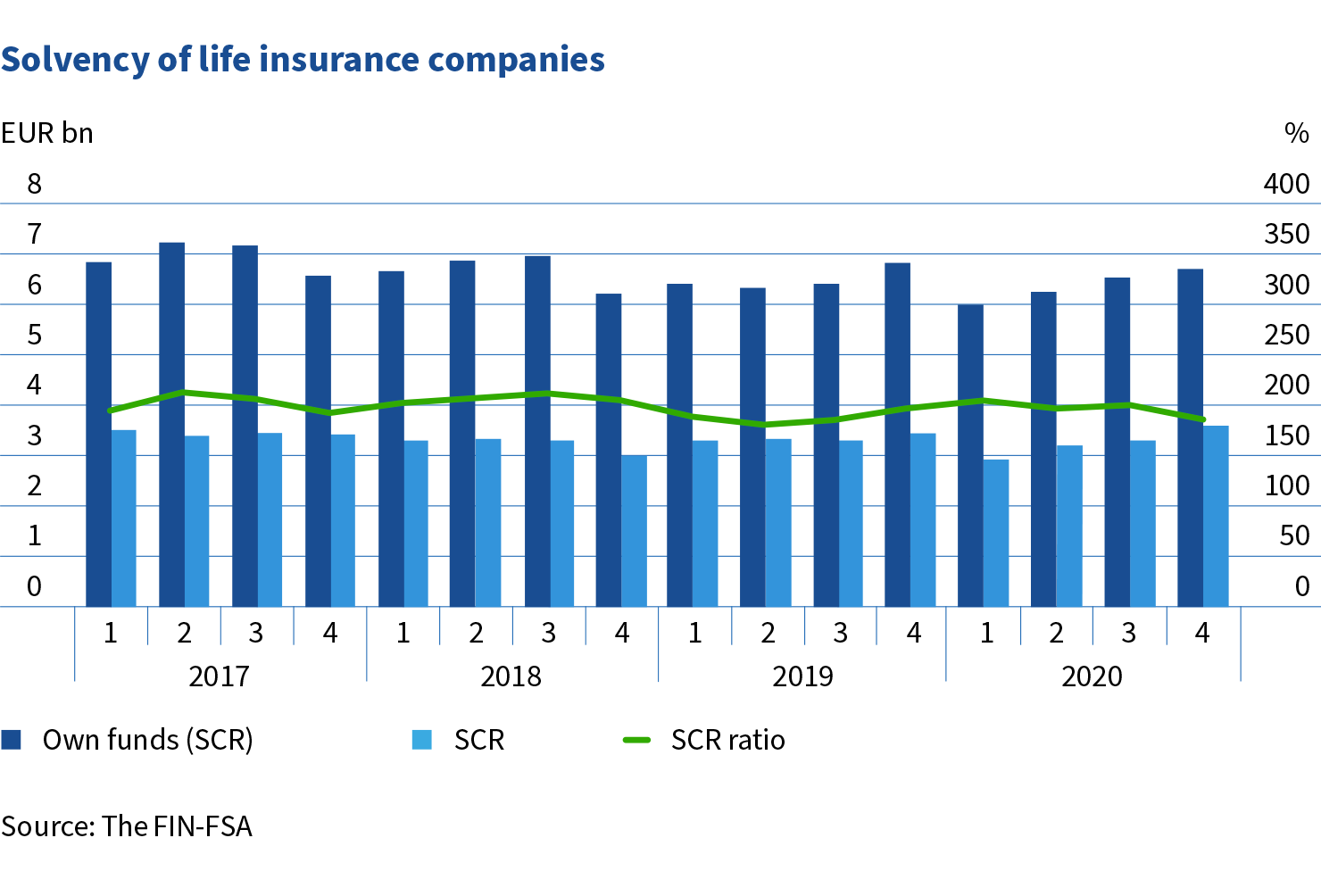 Major movements in the investment markets during the review year caused significant fluctuations in companies’ solvency ratios. However, good solvency buffers protected the companies with higher investment risk levels. In addition, the dampening mechanisms included in the Solvency II framework mitigated the impact of changes in market prices on solvency. At the end of March, risk parameter hedging against equity price fluctuations reached its maximum level, and volatility adjustment providing a hedge against changes in credit risk margins was at its highest.

Non-life insurance companies’ investment returns recovered after the steep decline seen at the end of March. All asset classes achieved a positive return.

The profitability of non-life insurance improved, as claims expenses on workers’ compensation as well as motor vehicle insurance decreased due to the pandemic. Companies increased prudence of their accounting technical reserves by lowering their related discount rates, but the downward impact of the measure on profitability was smaller than in 2019. Measures aimed at preventing the spread of the pandemic, while causing layoffs, for example, eroded the premium income from workers’ compensation insurance. 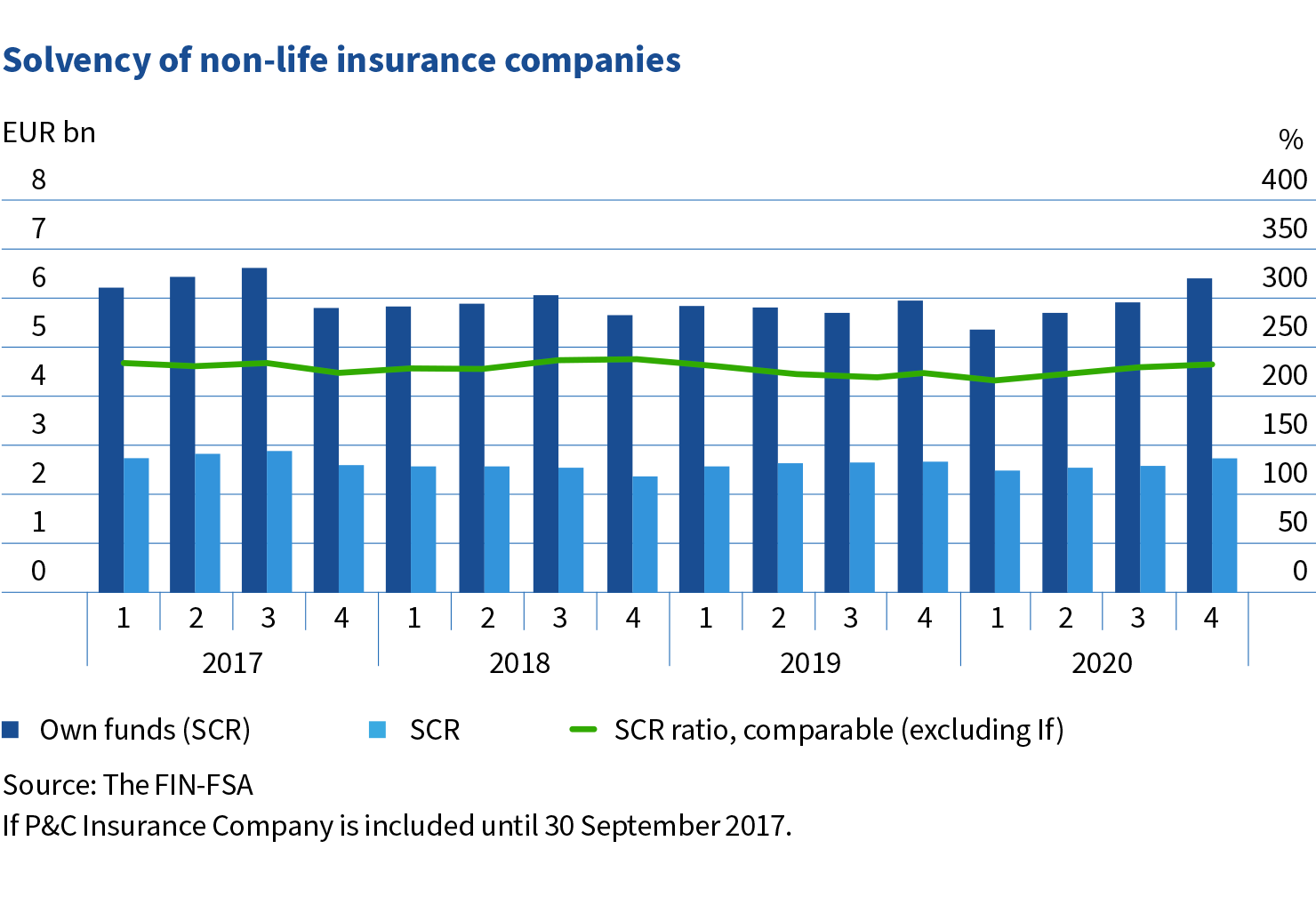 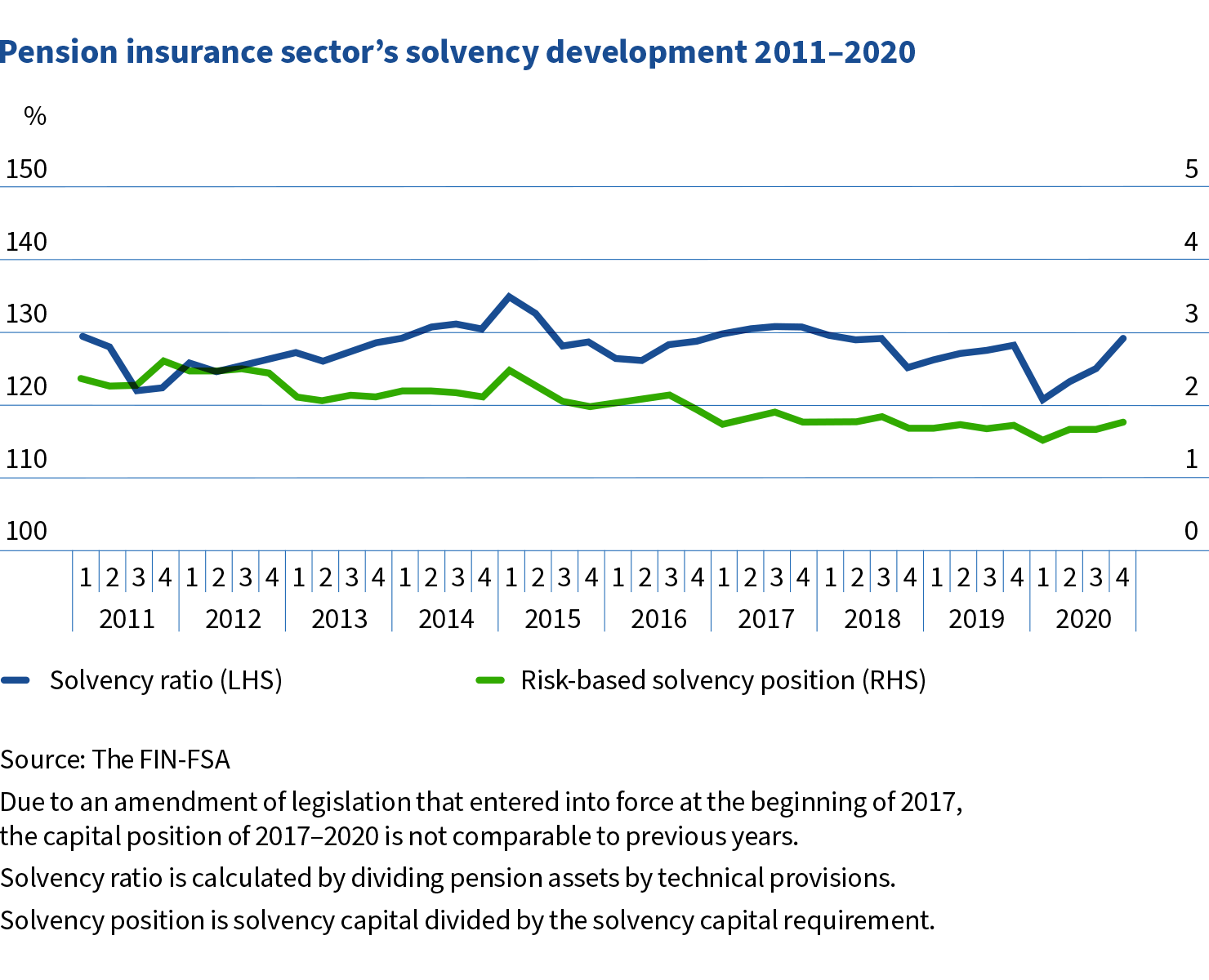 FIN-FSA-related topics most visible in the media

4.    Appointment of CEO of LocalTapiola